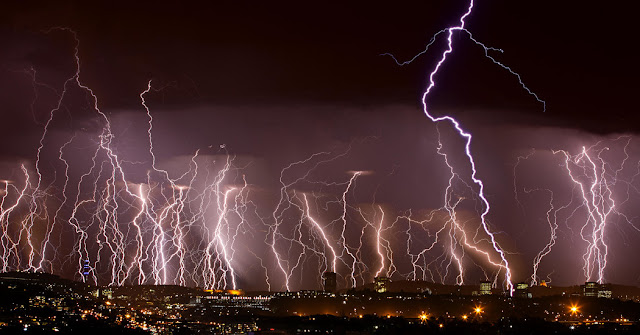 During the summer months in north India, an occasional thunderstorm associated with lightning and rainfall may provide some respite from the intense heat. However, it also leaves a trail of destruction accounting for nearly 2,500 deaths caused by lightning strikes every year (Source: Annual Report, NCRB). Thunderstorm and lightning strikes have emerged as one of the major weather hazards of recent years in many parts of the country.
Why do thunderstorms and lightning occur?
The genesis of a thunderstorm is dependent on four factors - intense heating, moisture availability, instability in the atmosphere and a trigger. The reason why thunderstorms occur mostly during the summer season is because the lower level atmosphere and surface of the earth is hot. Heating makes the parcel of air lighter and leads to low density of atmosphere.
Secondly, if there is moisture, air becomes moist and hot, moist air is lighter than dry air and rises. As the air rises, it transfers heat from the surface of the earth to the upper levels of the atmosphere. The water vapour it contains begins to cool, releases heat, condenses and forms a cloud. The cloud eventually grows upward into areas where the temperature is below freezing and various types of ice particles can be created from freezing liquid drops.
Thirdly, instability in the atmosphere is explained through lapse rate, which means change of temperature with height. 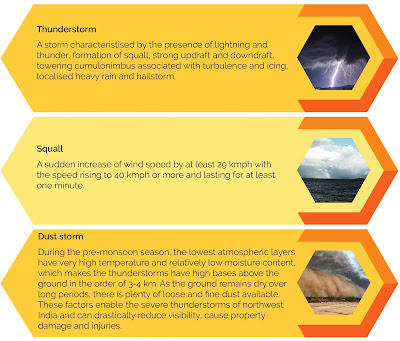 However, we don't get thunderstorms everyday in the summer. Here, the 'trigger' comes into picture, which leads the air to move up rapidly. This triggering comes when there is a weather system. It may be a trough line, or a cyclonic circulation, or a Western Disturbance.
Lightning is an electrical discharge caused by imbalances between storm clouds and the ground, or within the clouds themselves.
What is the impact of thunderstorms and lightning?
Thunderstorm and lightning strikes result in loss of life and injuries, loss of livestock, livelihoods, and damage to infrastructure, thereby affecting the output of people and impacting revenue generation. Thunderstorms and lightning strikes are potentially hazardous for the aviation sector, and for the transport, power, communication and other socio-economic sectors too. 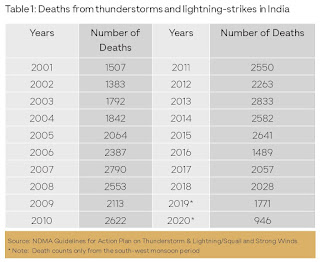 What has NDMA done?
It was in 2018, when severe thunderstorms and lightning hit several parts of India that their destructiveness was highlighted – a large number of human casualties and severe economic losses resulted. The increase in occurrence and severity of these events was a wake-up call for all the concerned agencies to take appropriate action for prevention, preparedness and mitigation to save lives, livestock, property and infrastructure.
NDMA drew up the national 'Guidelines for Preparation of Action Plan – Prevention and Management of Thunderstorm & Lightning/ Squall Dust/Hailstorm and Strong Winds' for improving the capacity of the states to deal with these incidents in a scientific and planned manner and released it in 2019.
The National Guidelines on thunderstorm and lightning identified the issues pertaining to such disasters and defined the roles and responsibilities of the Central government and the states/ UTs in matrix format. This matrix consists of segments corresponding to the thematic areas of understanding risk, inter-agency coordination, investing in Disaster Risk Reduction (DRR) – nonstructural measures and structural measures – and capacity development.
NDMA conducts regular meetings with vulnerable states prone to thunderstorms and lightning strikes to review their preparedness and the mitigation measures, such as the actions taken for early warning and dissemination of the same, community based warning systems and disaster management, creation or arrangement of shelters, Information Education Communication (IEC) actions for behavioural change and long-term mitigation measures.
Due to regular monitoring and efficient implementation of the Guidelines, the number of deaths on account of thunderstorms and lightning strikes have been consistently reducing.
1.Comments will be moderated by NDMA'seditorial team. 2.Comments that are abusive, personal, incendiary or irrelevant cannot be published. 3.Please write complete sentences. Do not type comments in all capital letters, or in all lower case letters, or using abbreviated text. (example: u cannot substitute for you, d is not 'the', n is not 'and'). 4.We may remove hyperlinks within comments. 5.Please use a genuine email ID and provide your name, to avoid rejection.