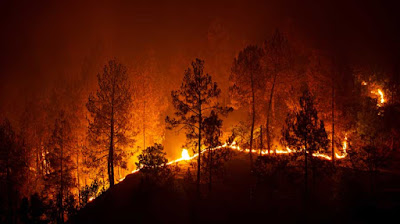 India experiences forest fire incidents each year. According to the Forest Survey of India (FSI) about 36% of the country’s forest cover has been estimated to be prone to forest fire, out of which nearly 4% of the country’s forest cover is extremely prone to fire. The forest fire season in India usually occurs between the months of February and June. However, due to climate change and man-made factors, the occurrence, risk and severity of forest fires have increased as of late.
Dzukou Valley, about 30 km from Nagaland’s capital Kohima, is a popular trekking destination known for its lilies and biodiversity, was engulfed in fire on 29 December 2020. It took two weeks and the efforts of the National Disaster Response Force, Indian Air Force, local authorities and volunteers to douse the fire completely.
Not long after that, a major fire broke out on 28 March 2021 in Shirui Peak, home of the famous Shirui lilies in Manipur. NDMA held a meeting with concerned officials on 1 April 2021 to assess the situation as well as discuss measures to prepare for future forest fires.
The serene hills of Uttarakhand have also experienced raging forest fires in different parts of the State since the beginning of April 2021, damaging more than 500 hectares of forest land. Forest fire incidents become a matter of concern this year as the country is simultaneously facing COVID-19 pandemic. The smoke rising from forest fires can cause difficulty in breathing and prove to be more deadly for people residing in the hills.
Causes of forest fire
Forest fire is the burning of vegetation in a forest and is caused by either natural or manmade factors. Natural causes entail lightning, high atmospheric temperatures, and dryness (low humidity). However, in modern-day society, the anthropogenic origin of the fires is common. Electric spark or any source of ignition which comes into contact with inflammable material in the forest, burning debris, unattended campfires, shifting cultivation, the use of fires by villagers to ward off wild animals, smoking near vegetation and disposing the cigarette into dry vegetation without putting out the burning butt are some of the causes of man-made forest fire.
A forest fire can be divided into three phases: grass, undergrowth and crown fires. Usually, grass and the dry undergrowth ignite first and are easy to control. If the fire reaches the treetops, especially in the case of conifers, leading to a crown or canopy fire it becomes considerably more difficult to control. 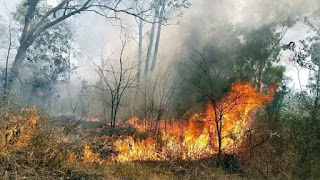 Protecting our forests
When a forest fire occurs, the entire ecosystem with the plants and animals living within it, are irretrievably lost. The distribution and frequency of forest fires are increasing across the globe. In many regions of the world, forest fires are natural processes and can have beneficial effects on forests.
However, the recent trend of forest fires present a different picture. Some fires are too severe, occurring in habitats where they were very limited, unseasonal, or even more intense and frequent. In these cases, forest fires pose a serious threat to forest ecosystems and well-being of humans.
In order to protect our forest ecosystems, it is imperative to be vigilant. Generating awareness among the local communities and training them to be the first responders to forest fire incidents can help in taking timely action. Undertaking responsible actions can help in the successful mitigation of man-made forest fire incidents across the country.
1.Comments will be moderated by NDMA'seditorial team. 2.Comments that are abusive, personal, incendiary or irrelevant cannot be published. 3.Please write complete sentences. Do not type comments in all capital letters, or in all lower case letters, or using abbreviated text. (example: u cannot substitute for you, d is not 'the', n is not 'and'). 4.We may remove hyperlinks within comments. 5.Please use a genuine email ID and provide your name, to avoid rejection.