On the morning of 13th May, IMD released information on the formation of a low-pressure area over southeast Arabian Sea and adjoining Lakshadweep area. This was to intensify further in the subsequent 24 hours into a cyclonic storm, named ‘Tauktae’ and move north northwestwards covering the entire west coast of India and make landfall in Gujarat by 17th-18th May.
In view of this, NDMA proactively took a meeting on the very same day with the concerned SDMAs to take stock of the preparations to reduce the effect of the impending cyclone. Do’s and don’ts related to preparation, precautions to take during cyclone were immediately disseminated on social media platforms television and radio. Hon’ble PM Narendra Modi also held a meeting on the 15th to review preparedness of the States, Central Ministries/Agencies for Cyclone Tauktae.
Trajectory of Cyclone Tauktae (14-19 May, 2021) 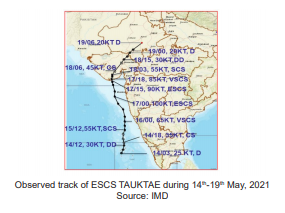 Cyclone Yaas
As the remnants of Tauktae were spreading in north India, another low pressure area was identified and informed by IMD on 19th May, this time on the east coast of India. The low pressure area identified by IMD was likely to be formed over Andaman Sea and adjoining east central Bay of Bengal around 22nd May. It was to intensify gradually into a Cyclonic Storm during the subsequent 72 hours and move northwestwards reaching West BengalOdisha coast around 26th May.
NDMA immediately reviewed preparations by conducting a high level meeting with NDRF, IMD, CWC, east coast States and other response services on 21st May. Hon’ble PM Narendra Modi also held a meeting on the 23rd to review preparedness of the States, Central Ministries/Agencies for Cyclone Yaas. 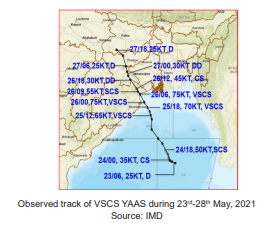 Trajectory of Cyclone Yaas (23-28 May, 2021)
Preparation was the key!
The cyclone season of 2021 entailed with it the additional challenge of COVID-19. Safe evacuation of thousands of people while ensuring maintenance of COVID appropriate behaviour, along with special preparedness for COVID management in hospitals, power backup and storage of essential medicines in vulnerable locations were some additional and necessary preparations authorities had to undertake this season.
Early warning by IMD and the coordination between different disaster response agencies made cyclones Tauktae and Yaas success stories of accurate forecast, solid preparedness, quick pre-emptive action, and adaptiveness during the pandemic.
The number of days between the end of Tauktae and the beginning of Yaas were not more, only 4 days. However, India’s readiness and response to the double trouble of cyclones during the second wave of COVID-19 highlighted the shift in India’s disaster management approach, from being response-centric, to now being preparation centric.
1.Comments will be moderated by NDMA'seditorial team. 2.Comments that are abusive, personal, incendiary or irrelevant cannot be published. 3.Please write complete sentences. Do not type comments in all capital letters, or in all lower case letters, or using abbreviated text. (example: u cannot substitute for you, d is not 'the', n is not 'and'). 4.We may remove hyperlinks within comments. 5.Please use a genuine email ID and provide your name, to avoid rejection.