Do You Know? - Interesting Facts on Cyclones 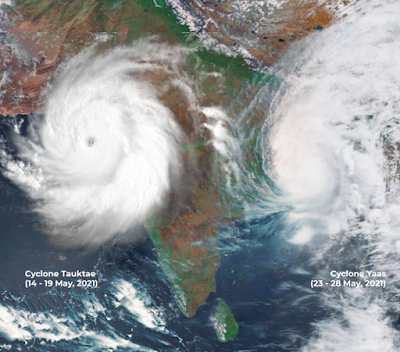 Do you know what are cyclones?
A cyclone is an extreme weather phenomenon caused by disturbances around a low pressure area over water bodies. Winds spiral around the centre of this low pressure area in a snake-like coil and gather speed. These winds rotate anti-clockwise in the northern hemisphere and clockwise in the southern hemisphere. When it develops over tropical waters, it is known as a tropical cyclone. Tropical cyclones that are formed over the Atlantic Ocean are called hurricanes; those formed over the Indian Ocean are called cyclones, and those which are formed over the Pacific Ocean are called typhoons.
The average life period of a tropical cyclone is about seven days. However, they are relatively short lived over the north Indian Ocean with a life period of about 5-6 days. There are two cyclone seasons in the north Indian Ocean - premonsoon season (April-June) and post-monsoon season (OctoberDecember). The months of MayJune and October-November are known to produce cyclones of severe intensity. The eastern coast of India is more vulnerable than the western coast. Odisha and Andhra Pradesh are the most vulnerable followed by West Bengal and Tamil Nadu and Puducherry. On the western coast, Gujarat is most vulnerable.
Do you know how cyclones are named?
The cyclones that are formed in any ocean basin around the world are named by the Regional Specialised Meteorological Centres (RSMCs) and Tropical Cyclone Warning Centres (TCWCs). There are a total of six RSMCs in the world, including the India Meteorological Department (IMD).
The India Meteorological Department (IMD) names the cyclones developing over the north Indian Ocean, including the Bay of Bengal and the Arabian Sea. It also issues advisories to 12 other nations in the region on the development of cyclones and storms.
The World Meteorological Organization (WMO) and the United Nations Economic and Social Commission for the Asia Pacific (ESCAP) have been naming cyclonic storms since 2000. In April 2020, IMD released a list of 169 cyclone names. 13 suggestions were sent in by the aforementioned WMO/ESCAP member nations.
Do you know the meaning of Tauktae and Yaas?
Tauktae was named by Myanmar. It means ‘gecko,’ a very high-pitched lizard in Burmese language. Yaas was named by Oman and it means ‘Jasmine’ in Persian language.
Do you know about Cyclone Tauktae?
During the satellite era (1961-2021), Tauktae was the most intense cyclone after the Kandla cyclone in 1998. It was a very rare cyclone causing adverse weather over west coast States and Union Territories as it moved parallel to the west coast and crossed Gujarat. The life period (D to D) of the system was 129 hours (5 days & 9 hours).
Do you know about Cyclone Yaas?
Cyclone Yaas had developed just after 4 days of the dissipation of extremely severe cyclonic storm (ESCS) Tauktae (14- 19 May) over the Arabian Sea. The life period (D to D) of the system was 114 hours (4 days & 18 hours).
1.Comments will be moderated by NDMA'seditorial team. 2.Comments that are abusive, personal, incendiary or irrelevant cannot be published. 3.Please write complete sentences. Do not type comments in all capital letters, or in all lower case letters, or using abbreviated text. (example: u cannot substitute for you, d is not 'the', n is not 'and'). 4.We may remove hyperlinks within comments. 5.Please use a genuine email ID and provide your name, to avoid rejection.