January 27, 2021
What is an avalanche?
An avalanche is an event that occurs when a cohesive slab of snow lying upon a weaker layer of snow fractures and slides rapidly down an inclined slope such as a mountainside.
Why does it occur? 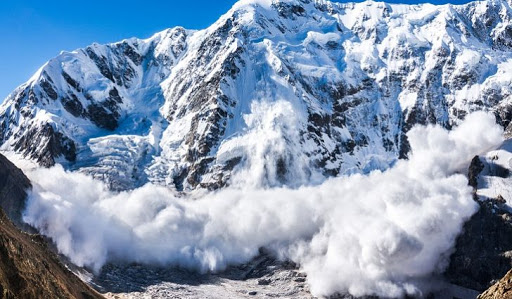 An avalanche occurs when a layer of snow collapses and slides downhill. Avalanches are caused by a steep slope, snow cover, a weak layer in the snow cover and are triggered by either natural forces, such as precipitation, wind drifting snow, rapid temperature changes or human activity.
What are the signs of an avalanche?
Avalanches mostly occur on steep slopes - between 25 and 45 degrees, conv
ex slopes (spoon-shaped). Loose, underlying snow is more dangerous than when compact and new snow is particularly dangerous. Rapid snow settlement is a good sign as loose, dry snow slides more easily. Low temperatures increase the duration of snow instability, while a sudden temperature increase can cause wet snow slides.
How to stay prepared?
Keep track of weather before heading for snow-capped mountains. Stay indoors and suspend all outdoor plans once an official warning is issued, avoid steep slopes and keep an evacuation plan ready. During a low danger avalanche warning, move on slopes carefully and mark your tracking path using a piece of cloth, stick etc.
If stuck, how to stay safe during an avalanche?
Try to stay on the surface or get away to the sides and hold on to something sturdy. Make breathing space by creating an air pocket using one hand and knock the surface regularly to attract rescuers.
1.Comments will be moderated by NDMA'seditorial team. 2.Comments that are abusive, personal, incendiary or irrelevant cannot be published. 3.Please write complete sentences. Do not type comments in all capital letters, or in all lower case letters, or using abbreviated text. (example: u cannot substitute for you, d is not 'the', n is not 'and'). 4.We may remove hyperlinks within comments. 5.Please use a genuine email ID and provide your name, to avoid rejection.