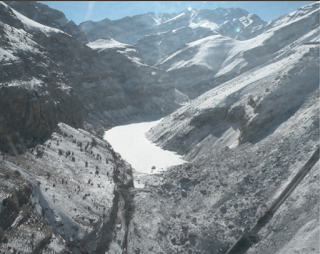 Glacial retreat due to global warming occurring in most parts of the Hindu Kush Himalaya, has given rise to the formation of numerous new glacial / landslide lakes which bear the potential for disastrous Glacial Lake Outburst Floods (GLOFs) or Landslide Lake Outburst Floods (LLOFs). A Glacial Lake Outburst Flood (GLOF) is a type of flood occurring when water dammed by a glacier or a moraine is released. When glaciers melt, the water in these glacial lakes accumulate behind loose, naturally formed ‘glacial/moraine dams’ made of ice, sand, pebbles and ice residue. A catastrophic failure of the dam can release the water over periods of minutes to days causing extreme downstream flooding. Peak flows as high as 15,000 cubic meters per second have been recorded in such events.
GLOF / LLOF events have killed thousands in many parts of the world and some of the largest events have occurred in the Himalayas, such as, the 2013 Chorabari lake outburst known as Kedarnath disaster in Uttarakhand, swelling of Jhelum river and Kashmir floods in 2014, Parechu river flash floods in Himachal Pradesh in 2005.
Due to a multi-day cloudburst, the Kedarnath disaster between 16 - 17 June 2013 became the country's worst natural disaster since the 2004 Indian Ocean Tsunami. The twin combination of melting of the Chorabari glacier and the eruption of the Mandakini river, caused the debris to block up the rivers, causing major overflow. Over 89% of the casualties occurred in Uttarakhand at that time and more than 5,700 people were ‘presumed dead’, this total included 934 local residents. Destruction of bridges and roads left about 3,00,000 pilgrims and tourists trapped in the valleys leading to three of the four Hindu Chota Char Dham pilgrimage sites. The Indian Air Force, the Indian Army, and paramilitary troops evacuated more than 1,10,000 people from the flood-ravaged area.
Almost within a year of the Kedarnath disaster, the northernmost region of India, Kashmir, faced another massive flood disaster in the year 2014. Continuous heavy rainfall resulting in swelling of Jhelum river, had caused a huge loss to the Rajouri, Srinagar and Bandipur regions, among many others in that region. More than 500 people died in that event and damage of properties was estimated between Rs. 5000 cr. to 6000 cr. 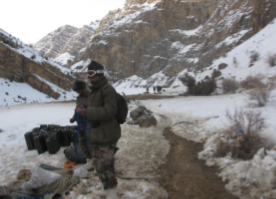 Other than such major disasters, there are a number of glacial lakes and landslide lakes in all the three major river basins, namely, the Ganges, the Brahmaputra and the Indus, which are very vulnerable to glacial / landslide lake outburst. Flooding of these lakes will be devastating for the surrounding areas.
In an incident of a landslide near the Phuktal river probably on 31 December 2014 about 90 km from Padum in Kargil district of Jammu & Kashmir, it blocked the course of river Phuktal, built a massive landslide dam lake along the river’s length approximately 15 km long stretch, submerging nearly 270 hectares of land. In case of a sudden breach of that dam (which is known as Landslide Lake Outburst Floods (LLOF)), the result would have been devastating for the downstream areas including property and infrastructure, especially to the Nimmo Bazgo dam.
Noticing a sudden decrease in the flow of water, the district administration conducted an aerial survey on 18 January 2015 and confirmed a blockage across Phutkal river. A technical committee was formed to study the blockage and the situation was reported to the National Disaster Management Authority for further action.
Meanwhile, the district administration prepared a list of all hamlets, families, infrastructure and alternative rehabilitation sites in case the natural dam breaks and evacuated the vulnerable settlements during control blasting at blockage sites. Control rooms were established in Kargil, Leh, Padum, Phuktal, Alchi and Chilling by the first week of February 2015.
The NDMA constituted a multi-disciplinary expert team with members drawn from various concerned stakeholder organisations, namely, Central Water Commission (CWC), Geological Survey of India (GSI), National Hydro Power Corporation (NHPC), Survey of India (SoI), Snow Avalanches Study Establishments (SASE), Border Roads Organisation (BRO), Indian Army and State Administration, for further course of action.
On the basis of the observations made by the experts, an action plan was presented before the National Crisis Management Committee (NCMC). It aimed to create a trench either manually and/or by using low power explosives so that the current yield as well as stored water behind the blockage is cleared. To aid the process, CWC provided information on approximate volume of impounded water, likely additional rise in river water at various locations and corresponding travel time in case of sudden breach of the landslide dam. The team also installed an Automatic Water Level Recorder (AWLR) at a school near Phuktal Gompa to monitor the river water level on a regular basis. 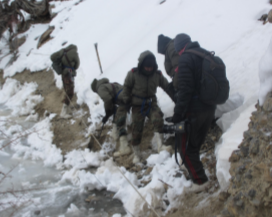 An expert team of NDMA reached Leh on 23 February 2015 to oversee the entire operation. However, due to unfavourable weather conditions created by Western Disturbance (WD) at that time, the team could only reach the landslide dam location by 10 March 2015 after several unsuccessful attempts.
The team proposed a revised action plan on the next day for controlled breaching with adequate safeguards. Soldiers of Ladakh Scouts under the supervision of officers of 70 Engineers constructed a 1.2 km long footpath and installed a safety rope from the camp base to the landslide location.
On 12 March 2015, the team inspected the landslide dam and identified the least resistant path for water flow using controlled blasting and excavation process. After continuous attempts using a variety of tools and techniques, the proposed trench was finally created on 16 March, 2015. The blasted boulders were removed manually. Approximately, 2m x 1.5m and 100m long trench was completed for controlled release of impounded water. Small humps, which were impeding the water flow, were removed using crowbars. The finer particles of debris in the channel were gradually washed out and the size of the channel increased resulting in slow but sure breaching of the landslide dam.
A major disaster-in-waiting was thus averted with coordination and cooperation from all the involved agencies. Later, NDMA developed a Standard Operating Procedure (SOP) on Averting Threats Emanating from Landslide Dams on Rivers in Mountainous Regions and circulated the same to all the hill states and concerned stakeholders.
In view of the above incidents, NDMA collaborated with the Swiss Agency for Development and Cooperation (SDC), Embassy of Switzerland to India, to develop the NDMA Guidelines on the Management of Glacial Lake Outburst Floods (GLOFs) to formulate strategies for GLOF and LLOF risk management, reduction and mitigation in the country. These Guidelines are a way forward for the concerned Ministry/Department and other concerned stakeholders who will take actions for preparedness, prevention, mitigation, response to GLOFs and LLOFs, with awareness, capacity building of vulnerable areas, thus, reducing imminent danger. 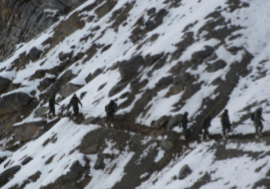 This is the beginning of managing GLOF / LLOF in India. The major challenges to avert or reduce the impact of GLOF / LLOF calamities, such as the development of robust GLOF / LLOF early warning system with last mile connectivity, adoption of multi-hazard ground realities during developmental planning and implementation of projects, awareness generation of public and local communities, capacity building of line departments of affected States/UTs and other stakeholders through innovative approach, integration of space and latest science-technology inputs into identification, monitoring and mitigation of GLOF / LLOF are a few major ones on priority. Local authorities and bodies must understand their role and responsibilities in enforcement of regulations and codes in construction and flash flood management practices due to GLOF / LLOF in hilly terrain with the involvement of local communities.
The ten-point agenda on Disaster Risk Reduction (DRR) outlined during the 7th Asian Ministerial Conference in the year 2016 by the Hon’ble Prime Minister of India, reflects upon the ‘opportunity to learn from a disaster’; and is one of the major learnings to look forward to with regard to GLOF / LLOF disaster events.
1.Comments will be moderated by NDMA'seditorial team. 2.Comments that are abusive, personal, incendiary or irrelevant cannot be published. 3.Please write complete sentences. Do not type comments in all capital letters, or in all lower case letters, or using abbreviated text. (example: u cannot substitute for you, d is not 'the', n is not 'and'). 4.We may remove hyperlinks within comments. 5.Please use a genuine email ID and provide your name, to avoid rejection.