Police - The Unsung Corona Warriors
- P.N. Rai, Member, Bihar State Disaster Management Authority
Among all the Corona Warriors, the A most visible yet the most underappreciated has been the humble policeman. Despite limited resources and grave risk to life, India's police agencies have risen to the challenge. Without them, achieving the primary objective of the lockdown – restricting the outbreak – would have been impossible.
As the lockdown began on the midnight of March 24, people sheltered at home, commercial activities came to a halt and transport was grounded, traditional police functions were replaced by new ones. In place of the routine duties of law-and-order maintenance, crime control, and trafﬁc management, police were tasked to ensure that the lockdown was effective. As the situation evolved, many new responsibilities were added. As the pandemic is expected to continue for a few months more, newer dimensions of policing will emerge.
The National Policy on Disaster Management (NPDM) 2009 clearly describes police as the 'ﬁrst and key responders' in a disaster. Incidentally, a pandemic was not 'a notiﬁed disaster' before COVID-19. When the lockdown – among the most stringent measures taken in the world, affecting 1.3 billion people – began, police had neither any Standard Operating Procedure (SOP) nor any guidelines as they had never faced a situation even remotely similar. 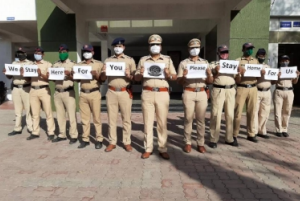 That, however, did not deter brave policemen and policewomen from risking their lives to ensure safety for the rest. They have manned barricade points through day and night to prevent unauthorised movement, advised those violating movement restrictions and drawn 'lakshman rekhas' in marketplaces. The pandemic has revealed the human face of the police personnel, who have gone beyond the call of duty; down to supplying vegetables and groceries to people in containment zones and arranging food and transport for migrant labour on the move. They have protected healthcare workers and ensured the seamless movement of transport and logistics for essential commodities. Police stations and checkpoints have become sites of India's public health campaign. Posters and banners, street plays have been used to communicate the importance of social distancing and hand-washing – ofﬁcers have even demonstrated proper hand-washing techniques at trafﬁc stops. These duties will continue for a while and will get even more challenging as the country has started moving again with Unlock.
More importantly, they have been working under life-threatening conditions, since many of them do not
have access to Personal Protection Equipment (PPE). Every single day, each one of them is bound to face the fear of catching infection, of taking it home and putting their family at risk. The fear is not unfounded either, as hundreds have been infected and many of them have died too. In Maharashtra, 1,273 police personnel from the 2-lakh-strong force had tested positive by the end of May, and 11 of them have lost their lives. More than 400 policemen have fallen ill in Delhi. When many of them had to be quarantined, the available strength of the force was depleted, forcing the department to draw personnel from non-combat units or wherever available. Manpower shortage became acute as the tasks expanded, especially in states like Bihar.
As days went by, the number of those arriving in states from outside and then quarantined rose to staggering heights, creating a nightmare for any administration. Police escorted migrant labourers from railway stations in cities to quarantine centres near their homes. The magnitude of the task can be gauged by numbers. In Bihar, for example, there were 12,909 quarantine centres in which 22 lakh people had registered and over 6 lakh had taken shelter as on May 28. 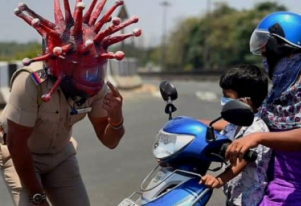 On top of all challenges, police faced attacks from angry people or mobs for acting against lockdown violations and taking suspected patients to testing centres. As the administration too was severely strained, there was often no clarity on matters like the movement pass, which led to their conﬂict with people.
The examples of social service are not meant to celebrate the police, but to bring to light a core aspect of their work. Juxtaposing the two functions – law and order maintenance and social service – broadens our understanding of police behaviour and performance, especially when it comes to exceptional situations. Thus, India's response to COVID-19 has highlighted the other police function – social service – apart from the maintenance of public order. This is indeed in tune with the advice of the second report of the National Police Commission of 1980 that 'the police should duly recognise, and be trained and equipped to perform the service-oriented role in providing relief to people in distress situations. 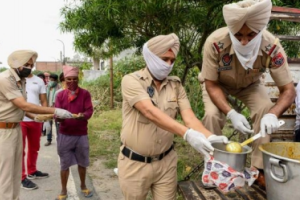 Going forward, there have been several valuable lessons from the pandemic. Above all, the police force needs to better appreciate its role as the ﬁrst responder in emergencies and consciously adopt disaster management (including disaster risk reduction activities) as one of its primary functions. Police reform committees too have spoken about it. The role of the National Disaster Response Force (NDRF) and State Disaster Response Force (SDRF) in some states is essential, but they have their limitations and therefore building ground-level capacity of police and sister agencies like ﬁre is critical to their function as the ﬁrst responder.
The force also needs to build frontline capacity for crisis resilience. Police training focuses disproportionately on public order with heavy emphasis on 'hard' skills – weapon use, crime control, combat skills, crowd control drills. Policing during the COVID-19 pandemic has underscored the need for soft skills – for example, dealing with people through effective communication and coordination. Police training should include a component in medical emergencies. Police need to prepare SOPs for public-health crises.
Last but not the least among the lessons, is community policing. In villages with large-scale return of migrants, the police force got stretched to the maximum, and villagers took upon themselves the role of policing – and they did well as they saw themselves as part of the solution. This model should be promoted for normal times too. Police do use community policing practices in mitigating communal tensions, left-wing extremism and urban policing; but these are often localised ad-hoc initiatives. It's time to integrate community policing into the police organisational ethos. Training academies should devote more time to this subject.
In fact, community policing will be much needed in the coming months, when conﬂicts at family or village level and petty crimes are likely to come up as social aftershocks of COVID-19. Migrant labourers have returned to their homes in villages in great numbers, and many of them are not likely to return to their work soon. Their prolonged unemployment can lead to situations in which police will have to intervene. Involving an alert community in the task will help the force.