COVID-19: A preliminary study on efficacies of some Siddha Formulations 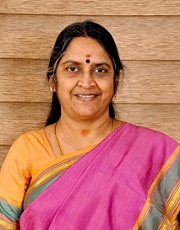 
Medical Science, as practised by our ancestors, was based on Nature and Spirituality. The human body was looked as a ‘whole’ with representative elements of the Cosmos. Therefore, the energies and activities of the Cosmos influenced the body and its functions.

One of the ancient systems of Indian Medicine is the Siddha system which has been practised more so in the southern part of the country. The word ‘siddha’ derives from ‘siddhi’, which means perfection. Those who attain the powers of perfection are called the Siddhars. The Siddhars formed a school of great knowledge and wisdom and were originally eighteen in number, called the Moolavarga Siddhars.

The descendants of the Siddha School had comprehensive and composite knowledge of medicine, alchemy, chemistry, botany, metallurgy, physics, astronomy, astrology and many more. Their healing art included principles of metaphysics and philosophy too.

Many of the formulations that these experts gave are used for various kinds of ailments by medical personnel practising the Siddha system of medicine as well as a home remedy in almost every village of Tamil Nadu. Most of these formulations are concoctions and decoctions of widely available plants, herbs and culinary material. The formulations are prepared in specific combinations and have focused use.

A medicinal concoction called the Nilavembu Kudineer has been used with tangible results in the prevention and management of Dengue. Various such kudineers like Adathodakudineer, Kandankathiri kudineer, Verkkombu kudineer have been used by the proponents of the Siddha system in the treatment of different types of Phlegmatic diseases.

Considering the beneficial effects that could be harnessed if the efficacies of the ancient formulations are scientifically standardised, the Tamil Nadu Dr MGR Medical University performed in silico analyses of some of the components of the Kapha Sura kudineer, especially with regard to their anti-microbial / anti-viral properties.

Three important proteins / protein complexes of the Sars-Cov 2 viral genome were specifically chosen for the docking studies. These are the Spike Protein, the 3-Chymotrypsin-like cysteine protease (3CLpro) and the RNAdependant RNA Polymerase (RdRp). Seven of the 15 components of kapha surakudineer were chosen in the first phase of the analyses. The results of the docking analyses are tabulated in Figure 1. 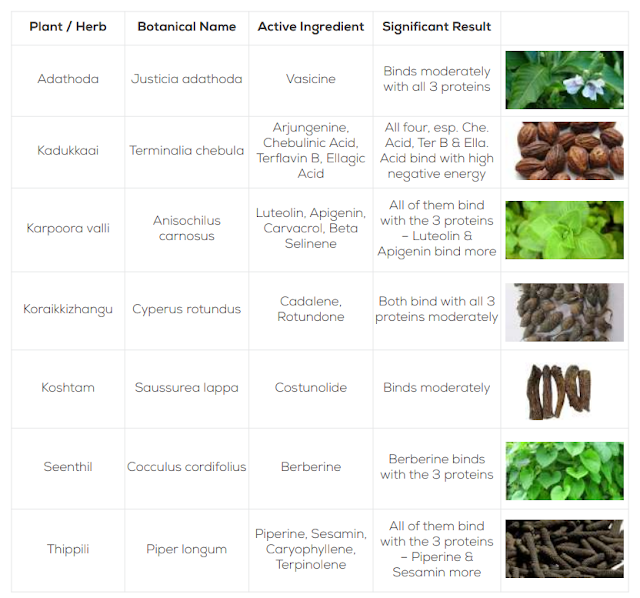 
The studies revealed that almost all of the active ingredients have the capacity to bind with the chosen proteins of the virus, thereby indicating properties that could interfere with viral entry into host cells, viral replication and viral functional activity.
In a bid to analyse other such widely used herbs and plants, we proceeded to do further in silico analyses of the active ingredients of other common plants. The results, as obtained are reproduced in Figure 2. 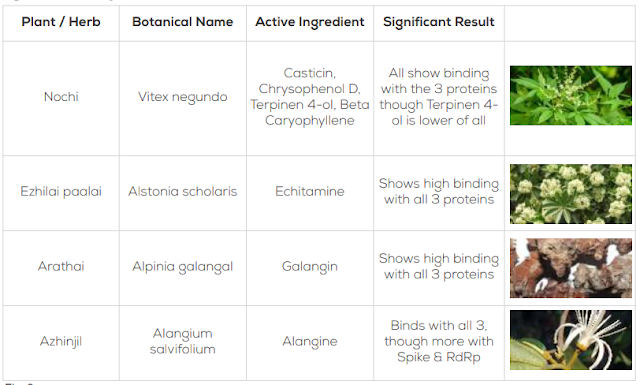 Figure 2
More studies and analyses are, of course, required to qualify and quantify the efficacies and potencies of the various formulations and concoctions.

However, these in-silico studies have widened the perspectives of the healing art and have proven the sensitivities of Indian ancient wisdom. More remains to be understood and put into use.