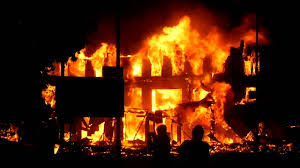 Yet another fire tragedy in our urban areas - this time at Anaj Mandi, Delhi - has sparked widespread outrage among the general public. The fire that occurred in the early hours of December 8, 2019 killed more than 40 people. It has again highlighted the inadequacy of our emergency response system, in this case the fire fighting system. Combined with this, lack of compliance with fire safety codes, community awareness on even basic preparedness measures, and lack of even basic urban planning in large parts of our cities has created a trend of increased fire risk. However, trend is not destiny. With a determined and concerted effort, the trend can not only be arrested but reversed too. However, this will require simultaneous work on long-term measures (increasing compliance of fire safety codes in buildings and settlements); medium-term measures (improving the capacity of fire services); and short-term measures (improving the preparednes of our fire fighters and communities).


This article aims to address some of these basic issues by drawing lessons from the Anaj Mandi fire. It appears that even with existing resources, the response could have been much better. This article highlights five key lessons:

First, inability to assess the extent of the fire and its impact timely compounded the impact. It is clear that it took a long time for the responders to have even a rough measure of the number of people likely to be trapped and requiring medical attention. In the absence of a professional medical response in the initial hours, some of the injured had to be sent to hospitals in auto rickshaws and Police Control Room (PCR) vans.

Second, lack of prior familairity with the area and prior engagement with the communities was a principal reason for the delay in estimating the number of people trapped in the building. It is not clear whether the knowledge of the local police and PCR van personnel and local informants was utilised to have an as-best-as-possible assessment of the situation. Correcting this requires two principal actions. The fire services need to do a reconnaissance of vulnerable areas and have dialogue with the communities from time to time through community outreach. The fire services do organise such activities but it needs a boost. In addition, the fire tenders need to be equipped with communication equipment, especially mobiles, so that they can begin to get basic information even prior to arriving on site. Such an advance assessment could help in preparing for response including devising strategies and tactics seeking additional help such as early deployment of motorcycle-borne fire fighters to get a first hand report of the fire’s extent.

Third, lack of proper pre-hospital medical response on site further compounded the impact. Apparently there was no arrangement for triage for those who were rescued. As a result everyone was sent to hospital.

Fourth, all the injured were sent to government hospitals as per press reports -- Safdarjung Hospital, Lady Hardinge Medical College and AIIMS Trauma Center – with some of them as far away as 22 km. Standard operating procedure demands that the administration enter into agreement with private hospitals in the jurisdiction so that in case of any disaster, the injured/ affected are taken care of in nearest hospital. Moreover, burn patients need treatment which cannot be provided in every hospital.

Fifth, lack of a proper communication strategy in times of an incident meant that there was a lot of confusion, desperation and chaos among the relatives of those trapped or injured in the fire.

Sixth, lack of awareness of basic preparedness measures among the affected further compounded the impact. Majority of them were choked to death. Out of 43 casualties, asphyxiation caused 39. Those living in the building apparently were not aware as to how they could escape with smoke all around. There was no one to guide them. This brings us to the challenge of preparing the community. Agreed, it was an illegal unit which need not be there but given the fact that such issues exist in our country, should there be an effort to build capacity of such people?

Addressing the issues highlighted above need not take a lot ofresources.These are the types of issues our fire services and the entire emergency management system can address over the short term while we also address the medium and long term issues.

- The views and opinions expressed in the article are those of the author and do not necessarily reflect the official policy or position of NDMA.