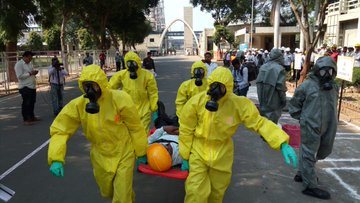 The chemical industry forms a major part of the flourishing industrial sector in Gujarat. This makes the State vulnerable to chemical disasters, which may occur due to human error, accidental exposure, terrorist attacks and sabotage. Such disasters may also get triggered as a secondary disaster after an earthquake, cyclone, etc.

Handling such emergencies need specialised skills and efforts, and coordination among all stakeholders. Even a small chemical accident can cause panic among people.

Chemical disasters, though few and far between, can cause immense immediate as well as long-term losses to both lives and property. It is, therefore, important to ensure the preparedness and resilience of regions with vulnerable establishments. One way to achieve that is through conducting Mock Exercises on the principles of the Incident Response System, which clearly attributes roles and responsibilities to each stakeholder thus resulting in a swift, effective and streamlined response.

In October this year, National Disaster Management Authority (NDMA) in collaboration with the Gujarat State Disaster Management Authority (GSDMA) conducted the first-ever State-wide Chemical Industrial Disaster Mock Exercise covering six districts - Vadodara, Valsad, Jamnagar, Ahmedabad, Surat and Bharuch - and more than 200 Major Accident Hazard (MAH) industrial units. The vulnerability of these districts increases manifold as huge quantities of hazardous chemicals are stored and transported at industrial plants, and even a a mild earthquake can cause major damage and destruction. Add to that the coastal location of these districts and the risk of cyclones and tsunamis can also not be ruled out.

Prior to this exercise, NDMA has conducted 87 Chemical Industrial exercises across the country. "NDMA has been constantly striving to upgrade the capacities at the State, multi-State and national levels. Over the years, we upscaled these exercises that we had started at the industry level, graduated to industrial areas and then to the district level. We have now conducted our first-ever State-level wide Chemical Industrial Disaster Mock Exercise," said Lt. Gen. N. C. Marwah, Member, NDMA.

In the run-up to the exercise, an orientation and a co-ordination conference were conducted on September 25, which was followed by a table-top exercise on October 10. These exercises helped prepare the participating districts for the actual exercise.

On October 11, the exercise began at 9 AM with the simulation of an earthquake with a magnitude of 7.7 on Richter scale near Bhuj in Kutch district, causing damage to various industries and its secondary effects on the neighbouring areas. Immediately, sirens blew out at the State Emergency Operation Centre (SEOC) at Gandhinagar, IRS got activated and all stakeholders were informed about the situation through the SEOC. 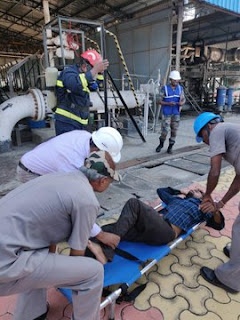 As the communication network and power lines were affected, satellite phones were used to gather information on the resultant damage at various locations. Multiple scenarios - gas pipeline leakage, crude tank rupture - were simulated during the mock exercise to test the efficacy of the Emergency Response Plans of the districts as well as the industries.

The exercise tried to create a scenario close to reality so as to assess and improve the preparedness and response mechanism of all stakeholder agencies in the event of a disaster situation. Vulnerable people were evacuated and the injured were taken to hospitals. The drills were carried out with support from all stakeholder agencies such as National Disaster Response Force, State Disaster Response Force, Police, Army, Air Force, Navy, Coast Guard, health department, local administration, Aapda Mitras (disaster volunteers) and resources from the industrial establishments.

In the post-exercise analysis, done through video-conferencing, all the participating districts discussed the challenges faced during the exercise. Ways to fix the gaps were also discussed. "Such exercises help improve coordination among participating agencies, which plays a crucial role during an actual disaster situation. It also helps revise, upgrade and streamline SOPs for emergency situations," said NDMA’s Maj. Gen. V.K. Datta (Retd.), who led the exercise.

This exercise is significant as any disaster in the country's chemical corridor can lead to severe economic losses affecting the regional as well as the national economy.

1. Comments will be moderated by NDMA'seditorial team. 2. Comments that are abusive, personal, incendiary or irrelevant cannot be published. 3.Please write complete sentences. Do not type comments in all capital letters, or in all lower case letters, or using abbreviated text. (example: u cannot substitute for you, d is not 'the', n is not 'and'). 4. We may remove hyperlinks within comments. 5. Please use a genuine email ID and provide your name, to avoid rejection.