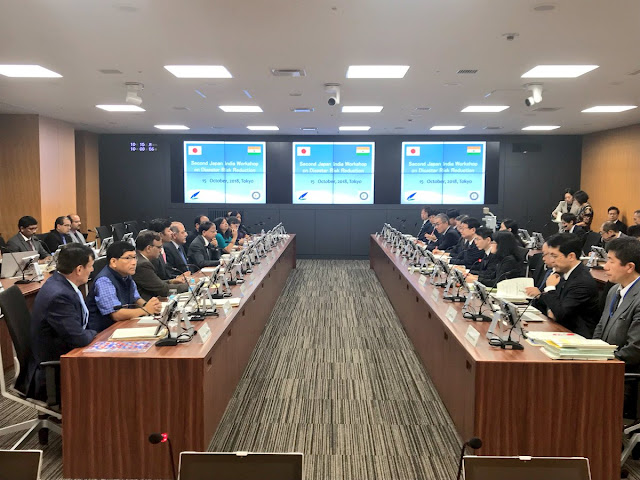 India and Japan are two of the most disaster-prone countries in the world. Japan is situated along the Pacific Ring of Fire and is highly susceptible to earthquakes. Given its long history of devastating earthquakes, Japan has a very high level of community awareness. Its technological know-how, especially in the area of earthquake risk reduction, is among the most advanced in the world.

India is rapidly urbanising and a massive investment in the infrastructure sector is imminent. As nearly 59% of India’s landmass is prone to moderate to severe earthquakes, this cooperation will not only save lives in the event of an earthquake but also make for great economic sense that this investment is made earthquake resilient.

To realise the goal of a disaster-resilient Asia-Pacific, it is imperative that they come together to address disaster risk. Towards this, India and Japan signed a Memorandum of Cooperation on disaster risk reduction (DRR) in September 2017 with an aim to develop a specific bilateral Action Plan on areas of cooperation in DRR. This was followed by the first India-Japan workshop on DRR was in New Delhi on 14-15 March, 2018. 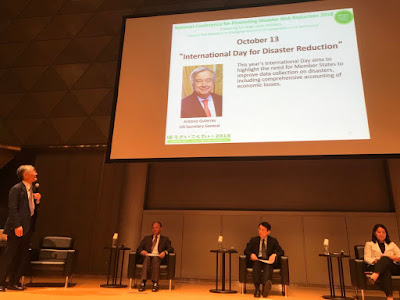 Based on the outcomes of the aforementioned workshop, the second India- Japan workshop on specific thematic areas was organized in Tokyo on 15 October 2018. An Indian delegation, led by Dr. P. K. Mishra, Additional Principal Secretary to the Honourable Prime Minister, visited Japan from 12 to 16 October 2018 to participate in this workshop.

The 12-member delegation, including representatives from the central government, five State governments, as well as scientists and researchers from premier technical institutions of the country, also participated in a special session on International Day for Disaster Reduction. The delegation also held held high-level bilateral meetings and visited two locations - Kawasaki and Katori - where Urban Flood Control Infrastructure has been developed.

During the opening ceremony of the workshop, both the countries reaffirmed the need for continued collaboration in the area of DRR within the broader context of close ties and strategic co-operation between the two countries. Calling the workshop an important step towards fostering a sustained dialogue and mutual exchange between our two countries on DRR, Dr. Mishra said that despite the progress so far, recent events indicated that we cannot afford to be complacent.

Thanking Japan side for organising this important Workshop India's Ambassador to Japan, Shri Sujan Chinoy, said, "We can work together regionally and globally to save lives and reduce the risk of disasters. There is much that can be done to mitigate loss in all vulnerable countries by building global consensus and cooperation. With our shared values and growing convergence, India and Japan can complement each other’s efforts in this regard, with the Sendai Framework for Disaster Risk Reduction lighting the way forward."

The workshop was centered around four main themes: 1) Mock drills, exercises and training; 2) Meteorological hazards; 3) Earthquake early detection and warning systems; and 4) Use of advanced technology in disaster risk management.

At the special session on International Day for Disaster Reduction at Japan’s National Conference for Promoting DRR on October 13, 2018, Dr. Mishra underlined the importance of sharing experience of nurturing local self-reliance besides scientific and technical aspects.

These interactions have set the stage for deeper engagement between the scientific and technical institutions of the two countries, with a specific focus on earthquake risk assessment and urban flood risk management. 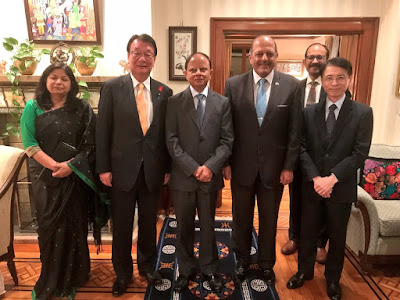 Dr. P. K. Mishra led two bilateral meetings - one with Shri Junzo Yamamoto, Minister of State for Disaster Management, Cabinet Office, Japan and the other with Mr. Hiroto Izumi, Special Advisor to the Honourable Prime Minister of Japan - for even greater collaboration between the two countries in the coming years.
India's Ambassador to Japan Shri Sujan Chinoy;  Shri Kamal Kishore, Member, NDMA; Ms. Rajni Sekhri Sibal, Additional Secretary, Disaster Management, Ministry of Home Affairs and Deputy Chief of Mission (Embassy of India in Japan) Mr. Raj Shrivastava attended these meetings.
Dr. Mishra expressed his appreciation for Japan’s Global Leadership of Disaster Risk Reduction issues. He also highlighted the need for focusing on disaster resilient infrastructure and sought Japan’s support for the Coalition on Disaster Resilient Infrastructure.
1.Comments will be moderated by NDMA'seditorial team. 2.Comments that are abusive, personal, incendiary or irrelevant cannot be published. 3.Please write complete sentences. Do not type comments in all capital letters, or in all lower case letters, or using abbreviated text. (example: u cannot substitute for you, d is not 'the', n is not 'and'). 4.We may remove hyperlinks within comments. 5.Please use a genuine email ID and provide your name, to avoid rejection.